"The biggest mystery with Hollywood mysteries set in Manhattan - no, make that any Hollywood movie set in Manhattan - is how the characters can afford to live the way they do. For example, Rowena Price, the New York CIty tabloid reporter and active single gal played by Halle Berry in 'Perfect Stranger.'

"Speaking as a former Upper West Side resident who was edged out by double-income families earning an average of $300,000 a year, I'd love to know how Ms. Price scrapes it together to live in the posh Ansonia."
- Jan Stuart, amNew York, Weekend, April 13-15, 2007

My chances of seeing Halle Berry in person while walking to a lounge to meet friends after work is greater than the likelihood of me ever living in the Ansonia, which is what almost happened Tuesday evening while walking to Cafe Iguana on West 54th Street to a showcase featuring my sorority sister's husband, which was fabulous!

I was walking by Ziegfeld Theater and noticed the below pictured commotion of onlookers awaiting Halle Berry either before or after the New York premiere of "Perfect Stranger." I didn't actually see her because I was in a hurry, but I managed to snap this quick camera phone photo op over my shoulder of what I am assuming was her limousine.

Thus proving today's point that I am more likely to see Halle Berry in person than to ever rent or own an apartment in the building in which her "Perfect Stranger" character lived. 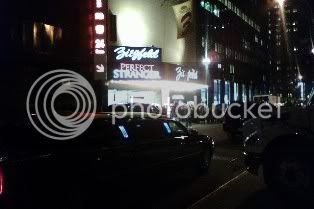