The Moments You Wait For

This afternoon I snuck into my boss's midtown office to have a quick, private conversation with one of the most important people in my life. My boss was at the downtown building so when I took the call on my cell, I casually slipped into her office and closed the door quietly behind me. As I stared at this exact cloudy view - smiling uncontrollably and making every effort to keep the welling tears from ruining my makeup - I heard the news I've been waiting years to hear. And I saw sunshine. 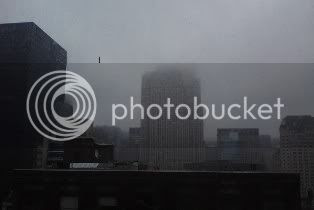 As a blogger, it remains inevitable that I have moments in life that cannot be fully disclosed in my virtual fishbowl. However, I wanted to record the feelings of this moment ... as if I'll ever forget.

The news was so amazing to receive, I felt like it was my own good news. It has been a long time coming and nothing is yet concrete - nor is solidification immediately on the horizon - but I am so excited and proud that I feel like my chest might burst. It's as if today's news has validated what I have believed, known and felt for years.

"It's the magic of risking everything for a dream that no one sees but you ..." I still can't remember where I heard that. I've also heard it said that our lives are just home movies we play in our minds. As flighty a notion as that is and as corny as I'm about to sound, today I had one of those moments in life that you file away in your VHS or DVD memory bank ... to remember.

... Like the last scene of Working Girl that I often reference, in which Melanie Griffith calls her best friend on the phone and says, "Guess where I am right now."

... Like when Rocky Balboa runs to the top of the art museum steps or when the Notre Dame football team carries Rudy Ruettiger from the field.

... Like when Christopher Gardner was so happy that he could barely contain himself in a sea of people and didn't know whether to clap, yell or jump up and down in The Pursuit of Happyness: "This part of my life... this part right here? This is called 'happyness.'"

... Or like my own New York home-movie moment when I experienced the pure bliss of realizing my goal of not starting 2007 in North Carolina, but rather to begin 2007 in the streets of Times Square as the only New York resident within a 3-mile radius of the New Year's Eve Ball (who wasn't being paid to be there). The only thing that was missing from that moment surrounded by crazy hats, streamers and confetti was the theme song from Rent.

You know you truly love someone if you can't remember which wonderful moments made you happier - theirs or your own.

In - five hundred twenty-five thousand six hundred minutes
How do you measure a year in a life?

How about love? Measure in love... seasons of love...

How do you measure a life of a woman or a man?

In truths that she learned or in times that he cried
In bridges he burned or the way that she died
Its time now to sing out though the story never ends
Let's celebrate, remember a year in a life of friends

AWESOME POST!!!! CONGRATULATIONS!!! I see that the goals you set ( not being in NC for 2007) etc, has paid off. I need to set more goals. Goals are like checklist...it feels sooo good to CROSS THEM OFF!!!