Last night I joined the aunt from Syracuse and her family-by-marriage for dinner at Tamarind, an Indian restaurant in east midtown. Dinner was delicious, conversation was great, and having family in the city is fabulous.

David (the son of my aunt's second husband) works in publishing, and Charlene (David's wife) is a corporate event planner. Both based in Manhattan. Both very successful. And both full of New Yorker-isms.

When I arrived 40 minutes late because of late-night publishing/ advertising blah, resulting from a morning of ribbon-tying for an upcoming event, followed by the frustration of trying to find a cab in midtown between 5 and 9pm, they were forgiving and armed with wine. When I had confimed by cell that I was five minutes away, Charlene had said, "That's New Yorker speak for 'I'm at 96th and West End.'"

Despite the fact that David and Charlene live in Brooklyn with their adorable son (of whom I have only seen adorable photos) and Charlene sent me a welcome gift while I was living on the air mattress in the living room in the Bronx (the title of that post is "Cockroaches Not Welcome Here" but that's not what she sent), it took a year and a half for us to get together ... and for me to get my New York State driver license.

David said something that I wanted to make the "quote of the evening" in my blog, but the wine haze has clouded it over. If I ever remember what it was, I'll have to update this post.

I decided I liked Charlene immediately, but fell in love with her when she refused dessert and then told her husband that he needed to order the cheese cake. Any man, who has been in a relationship with a woman for longer than five minutes, knows what that means.

Since Terrence is still in England and wasn't present to order a dessert for me to nibble on, here is a camera phone photo of my flourless chocolate cake with raspberry filling. 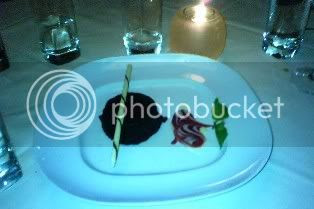