My New York State driver license arrived in the mail today. It only took me a year and a half to apply for one, but only through fault and procrastination of my own, which - by definition - made me a law breaker. As noted on the New York State's Department of Motor Vehicles website, "if you become a resident of NYS, you must get a NYS driver license within 30 days and surrender your out-of-state driver license."

However, it wasn't my need to return to the population of law-abiding, proper-license holding citizens. But motivated by an inane desire to flash a New York I.D. at night clubs and bars - rather than my old North Carolina one - I finally headed over to License X-press, Manhattan's solution for what would otherwise be a painful afternoon at the DMV lined up behind thousands of New Yorkers.

*A piece of paper to keep in my wallet while awaiting my Photo Document so I've been carrying my Passport to night clubs and bars. 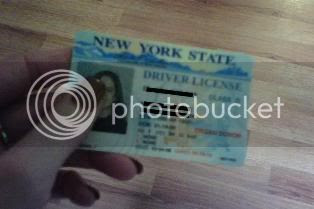 I got mine in January -- just 4 months after I moved here! -- and felt the same way.

I waited 5 years haha. License Xpress actually wasn't that bad for me either. I also went to 34th and 8th. I'd had on false start before when I forgot my social.

I was in and out in about an hour and a half and had to speak very little to the DMV folks.

My experience wasn't too bad. After one false start sometime ago (forgot my social) I was in and out of the 34th and 8th location in about an hour and a half. Not nearly as bad as expected.