Terrence and I went to see "The Lion King" on Broadway tonight. It was amazing, especially the costumes and special effects. 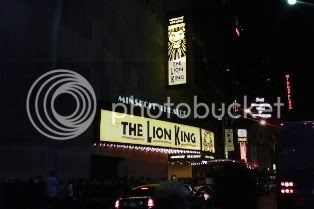 Afterward, I asked Terrence - a former Broadway non-enthusiast - which he had liked better: "The Lion King" or "Les Miserables," the first Broadway play Terrence had ever seen, which we saw in December. After a moment's pause, he replied, "Les Mis."

He won't admit it, but I had noticed that he was misty-eyed during the closing number of "Les Mis." A fellow Broadway aficionado was born that night.
posted by KJS at 11:55 PM