Today I attended my best friend's graduation from the Juilliard School. She is finally done with four years of intense training and has earned a diploma in drama with the special honor of scholastic distinction.

Scholastic distinction at the Juilliard School:
"The Juilliard School [was] pleased to recognize three students for Scholastic Distinction, an honors program for exceptional undergraduate performers and composers who wish to expand their scholarly activity by engaging in an extended independent research project in their senior year. Working under the supervision of a faculty advisor, these students prepare a substantial document that is reviewed by committee in the final semester. Successful completion results in the awarding of credit and the designation "with Scholastic Distinction" on the graduate's diploma and permanent record."

In addition to this year's graduates, the school also awarded seven honorary doctorates to Frederic Franklin, Benny Golson, Dan W. Lufkin, Sam Shepard, Stephan Sondheim, Audra McDonald and Stephen H. Clapp, who are among the greats in their respective arts and accepted their degrees before an ecstatic auditorium.

Audra McDonald, with whom my best friend has now joined the ranks as a Juilliard alum, also had the honor of serving as this year's commencement speaker. Though her speech was inspirational and riveting, I couldn't help but imagine that it might be my best friend on that stage one day addressing a graduating class of Juilliard students as their commencement speaker - and perhaps even accepting an honorary doctorate of her own. I am almost positive that all of her family members in attendance and her fiance were looking up there and wondering the same thing.

As the graduates crossed the stage, many families erupted in cheers and applause despite an initial request from the President of the school to hold all applause until the end. While it can be considered tacky by some, even the President seemed to understand that - regardless of the traditional protocol to request the withholding applause - sometimes you just have to let your joy break the rules.

There are few things I have been absolutely sure about in my life, but here are two - that moving to New York City is the best decision I will ever make - and that my best friend will have an amazing acting career. Fame and international acclaim are no guarantee; even Whoopi Goldberg said that those elements of the industry are strokes of luck as there are thousands of talented actors gracing the world's stages.

One should be careful not to confuse fame and success, but for my best friend - there is no doubting the latter. 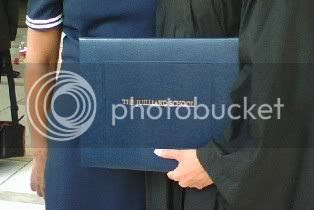