Naval Warfare (as blogged by Chris, a.k.a. the East Village Idiot)

From the web pages of East Village Idiot - It was so funny that I had to repost it as my girls and I recently had a conversation in a bar regarding men in uniform, which was incidentally prompted by Fleet Week and the Naval sailors currently perusing the streets of Manhattan. I have to say that I am a little disappointed that they aren't swarming the streets in the abundance portrayed on an episode of "Sex and the City," but men in firefighter gear also have a similar effect.

Without further ado is the warning issued on May 24 by the East Village Idiot:

For the next seven days, you will have a mortal enemy. He is desperate to get laid. In a head-to-head battle, he will always get the girl. You will spend months trying to get into a woman’s pants, and he will get into them in one night. You will wear your very best designer clothing to impress a woman, and your enemy, in his standard-issue polyester uniform, will take that woman home. You will meekly suggest going back to her place, and she will laugh. He’ll suggest the same thing, and she will graciously accept, and perhaps even offer to pay cab fare. You will wonder what consequences come with taking a woman home, like how long you have to wait to call her back after that night. Your enemy won’t even be in New York in a week, or a month, or perhaps a year. He’ll be out at sea, somewhere far, far away.

Gentlemen, this is your enemy: 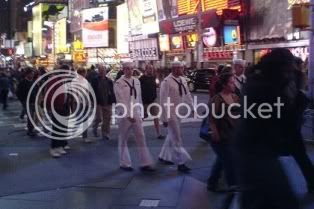 Beware Fleet Week. He may be a mere Seaman on the open waters, but for the next seven days, he is the Captain of the Civilian Cockblock.

And SUBWAYblogger announces: Hide your daughters: It's Fleet Week
posted by KJS at 7:35 PM

landmarks: in other words

Did I drink with you last night?

It's so nice for me to have found this blog of yours, it's so interesting. I sure hope and wish that you take courage enough to pay me a visit in my PALAVROSSAVRVS REX!, and plus get some surprise. My blog is also so cool!

Feel free off course to comment as you wish and remember: don't take it wrong, don't think that this visitation I make was a matter of more audiences for my own blogg. No. It's a matter of making universal, realy universal, all this question of bloggs.

I think it's to UNITE MANKIND! Don't see language as an obstacle. That's not the point. Open your heart and come along!!!!!

Okay, I've discussed this with a few people who I did drink with on Sunday, and apaprently you weren't there. Shame. I thought you were very funny!

No one ever says to me, "I guess you had to be there." I'm so good I'm funny without even being present and accounted for!

But seriously, Todd, lay off the bottle when you start seeing me in places I'm not.