I spent a long weekend cheating on New York, and after a Sunday all-nighter, I took an early flight back from Miami this morning in last night's make-up and the matching tank top that my friends and I had worn to the bars a few hours earlier. On the front, it read: "Tosha's Bachelorette Weekend, Miami 2007". On the back, each shirt had a funny phrase individually pertaining to each of us over our three days in South Beach. Based on our shirts alone, it is clear that Miami did not disappoint, and now it was time to return to my reality in NYC. In day-old clothes, it was like a 1300-mile walk of shame back to the city that I love after a steamy, tropical fling. 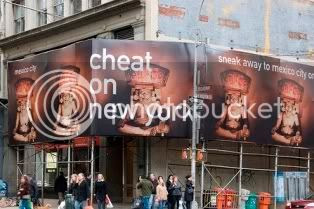 As much as I had been looking forward to this weekend trip, the best thing about leaving New York City on Friday was knowing that I was coming back on Monday. As the plane took off from Laguardia, I remembered how leaving New York (the few times I had been here prior to my move) once had me feeling sad and longing to return.

This time I only felt the excitement of meeting my friends in Miami and knowing that I would return home to this city after the weekend was over. I guess that's another way for someone like me - a former military brat with no specific origin - to know that I've finally found a hometown.

Ten of us congregated in Miami from our own varying origins - Atlanta, Georgia; Charlotte, North Carolina; New York, New York; Newport News, Virginia - for a bachelorette weekend that we will not soon forget. It was your basic bachelorette itinerary: dancing on Friday night, beach on Saturday, all-male review strip club on Saturday night, shopping on Sunday, bars on Sunday night. Our group - ranging from an NBA dancer to a district attorney ... to me - gathered to celebrate and honor our friend Tosha, who will be getting married next month in Charlotte.

I had not realized how much I needed a short vacation until I was floating in the Atlantic Ocean about 30 yards from the sands of South Beach. The past two years have been a whirlwind. Working three jobs in North Carolina to fund my relocation (August 2005-July 2006), moving to New York City, temping in midtown, living on an air mattress in the Bronx for three months (August 2006), new apartment and permanent employment (November 2006). Not starting 2007 in North Carolina with photos. It has been go-go-go for almost two years.

The shrinking view of Miami through my airplane window today prompted thoughts of how far my friends and I have come since our college days in Cullowhee, North Carolina. What were once awkward girls coming into our own and searching for our paths were now sophisticated, successful women reuniting for a carefree weekend in Florida to celebrate an upcoming marriage.

I fell asleep thinking about that somewhere over the southeastern coast and woke up to a view of the Jersey Shore as the captain announced: "We should have you on the ground in about fifteen minutes. We've got sunny skies and 70 degree weather at Laguardia. It's a beautiful day in New York."

As the plane banked left for it's approach into the airport and upper Manhattan and the Bronx came into view, it was my own imagination and the captain's voice in my head that announced: "It's a beautiful life in New York."
posted by KJS at 7:50 PM

Viva Miami! I love Miami so much! Its such the getaway place. I am in the process of moving from the South to NYC in 4 weeks! Your blog is keeping me motivated that in a month, I will be doing city walks of my very own.

The captain in my imagination always starts screaming for more alcohol.

Pardon the intrusion but I will be living vicariously through you from now on.
I heart NY.