I'd be damned if the MTA doesn't do that shit on purpose. Not only am I not afforded the option to switch trains with the new given knowledge that an express train was in close proximity, but I've had the reverse happen, where I am on the no. 1 as it arrives at the station and an empty express train is leaving. And, of course, the express train that arrives a few minutes later is packed. I would bet money that a radio conversation between two conductors goes a little something like this:

In the big scheme of things, switching to an express train between 96th and 42nd Street generally only saves me about 5-10 minutes, and as my best friend mumbles to people who are rudely in a rush: "If you're in that much of a hurry, you should have left yesterday."

But I think New Yorkers would generally be happier in the morning if the conductor would make announcements like:
"Welcome to 96th Street. It's a beautiful day in New York City. Transfer is available to the express 2 and 3 trains. A downtown 3 just left 110th Street and will be arriving in 2 minutes."

Maybe they do make announcements like this already; I wouldn't know because I can't usually understand the conductor. In any case, this morning I was annoyed as I watched a no. 3 express train arrive at 96th as we left on the no. 1 local, but I was weirdly comforted moments later when the no. 3 had not overtaken us at 72nd Street, and at 66th Street we began pacing a no. 2 express, which was moving very slowly and stopping frequently.

From an almost empty no. 1 local train, the look of discomfort and disdain is clearly visible on the face of an anonymous commuter pressed against the door of a packed no. 2 express train. 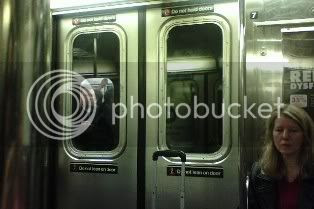 As we sped away on our local train, leaving the express train in our dust, I rode comfortably seated into the 42nd Street-Times Square station and began a lovely New York day. 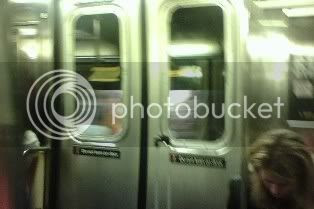