As I was walking through Grand Central to catch an uptown no. 4 train to my favorite nail salon on 125th Street, I noticed the Bridezillas advertising on trash cans, and thought to myself, "Either someone found it impishly appropriate to put this advertisement on a trash can or they wanted to scare the hell out of random commuting men." 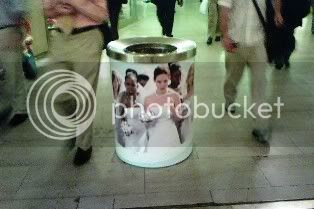 And then ... what's the likelihood that one of the angry brides on the advertisement would show up while I was taking a picture of it?
Well, this is New York. 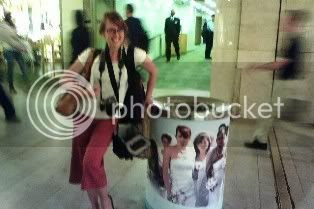 A friend of hers had told her that the ads were on trash cans in Grand Central so she had come to take a few pictures. An actress/model, she asked me to pass along a copy of her headshot and resume when she found out where I worked. And I am happy to help - even though I'm just an assistant and can't do too much more for her. Not only was she extremely nice and down-to-earth, but I found it secretly refreshing to see that an amazing, flawless face on camera looked normal in everyday life ... like me, like you, like anybody.

Yes, even you can be an insane, bitchy bride. I just hope that I one day look as good as she does in a wedding dress ... and that my photos look as great ... minus the snarl!

what are the odds..show biz,gotta be in the right place at the right time!!! that's pretty funny!!