I hate when someone sits on a packed train and takes up two seats. It's one thing if you are obese and cannot immediately help your current state; it's entirely different if you are of slender to average build and each of your butt cheeks are partially occupying separate seats.

Case in point, the below camera phone photo op of the woman in the red shirt. The photo is deceiving because of the angle (I was holding the phone at my side while squeeshed between six random arms all reaching for the same pole). This woman had roughly a foot of space to each side of her, yet she continued to occupy two seats on a crowded downtown no. 2 express train from 96th Street to Times Square during morning rush hour. 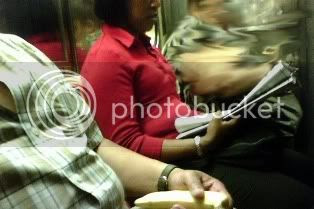 In the DC Metro youll have the entire car packed to the teeth and there will be a person, sitting on the outside seat (for two) more or less refusing to move in. Its not like you can step over them without actually stepping on them. The thought has crossed my mind.