So I finally fell down some steps in the city - a day after my coworker Victoria fell up some stairs in Bryant Park during her lunch break. My fall looked so bad that Terrence spun around and came jogging back to me with a look of horror on his face. He didn't even laugh. Well, we laughed later as he recalled how he had heard me slipping as I tried to break my fall, then had turned just in time to see me slide down the steps on my knees holding my ice cream in the air like a drunk determined not to spill a glass of whiskey. I was going to fall, but - damnit - I was not going to drop my ice cream in Central Park!
So enough about that ...

After I got off work yesterday, Terrence was waiting for me on the steps of the New York Public Library, and I snuck a quick camera phone photo as I approached. I call it "My Boyfriend on Some Steps." 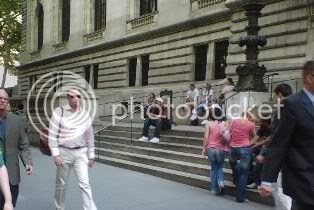 Walking along Fifth Avenue, I was able to coax him into posing for the below photograph and asked a passerby to take a picture of us with my camera phone. 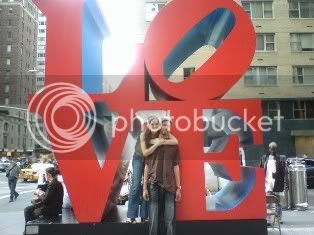 As we viewed the digital picture, I said, "Awww ... look we're in love." I wasn't looking at him when I said it, but I'm pretty sure he rolled his eyes.

I noticed an elderly man (seated below) on Fifth Avenue at the corner of Central Park, who had just had his portrait drawn by a street artist. As we passed by, there was something about the look on his face as he watched the artist sign the completed drawing. He just looked so happy and proud as he waited to receive his portrait. I found myself hoping that he wasn't lonely and that he had someone to share it with. I don't know why I notice things like that or why they stay with me that way, but they do. And, of course, I thought to turn around and take a quick camera phone photo op. Below the artist is holding the drawing and seemed to be looking for a frame as the elderly man waits patiently. 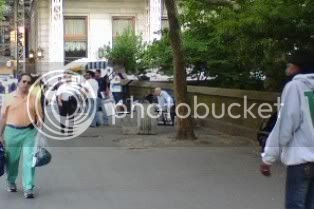 Central Park South (on the east side) - In the distance is the bench on which we sat while I recovered from my fall. Terrence had to help me hobble to another bench after we realized we were sitting near a babbling homeless man with his pants - and his underwear - pulled down below his hips. 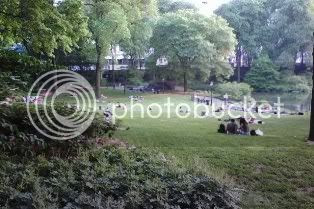 Dinner last night at Mobay Uptown in Harlem before Terrence flew to Ohio today to meet Kevin for this year's Gus Macker 3-on-3 basketball tournament in Zanesville. 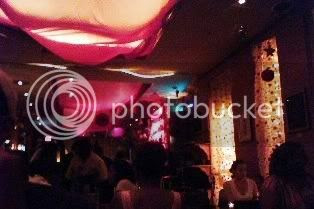 Oh you poor thing. at first I was concerned ( as Terrence was) then when you described how you fell with your ice cream....I LAUGHED!! I'm glad I wasn't with you...I'D STILL BE LAUGHING. Sorry, me & my niece are the same that way, we KEEP picturing the event and laugh, laugh laugh. Cute photos of your guy!! I like the central park pix too.