Crossroads of the World

A couple of weekends ago, Tita Marie and I were sitting on a bench in the 61st Street Station in Woodside (Queens) on our way to see a movie at the AMC Theater in Times Square. Amidst our random topics of conversation while we waited for the train, she briefly mentioned Tita Cita (one of my mom's four sisters). Tita Cita died in the Philippines a few years ago from breast cancer and had lived in New York City a few times before the cancer made it impossible for her to continue working.

"You know," she said, "Your Tita Cita loved Times Square. Sometimes after work, she would get off the train in Times Square just so she could walk around and look at the buildings, the billboards and the lights."

I tried to picture my aunt, before she was sick, taking a detour after a long week of work, exiting the subway and ascending the stairs into the crossroads of the world. Surely she had been tired and ready to get home after a six-day stretch as a live-in housekeeper, but undoubtedly she was often lured from the tunnels by the excitement of the place where 42nd Street crosses Broadway. And surely she was smiling as she strolled about under the blanket of lights that keep Times Square from ever knowing darkness. She had smiling eyes - the kind of eyes that always looked like they were attempting to conceal an inside joke or a funny secret.

It was so hard for her to die from cancer - not that it's ever easy for anyone to let go. But I knew exactly what Tita Marie meant as she quietly said, "Your Tita Cita really wanted to live."

This afternoon, I rushed through work in a failing attempt to leave on time in order to meet Tokii for a spinning class at the gym. It was an ambitious endeavor because I haven't left work before 7 p.m. in almost two weeks. When I finally passed through the revolving doors that spit me onto 42nd Street, it was too late to make it to the class.

Randomly recalling my conversation with Tita Marie and since the afternoon downpour had reduced itself to a light drizzle, I decided to walk down the street to Times Square. I opened my umbrella and settled into the customary New-Yorker-with-a-purpose stride until I turned the corner and the signature billboards loomed overhead. Then I slowed down, stared up into the lights that will continue to mesmerize and dazzle the world long after I am gone and took a stroll for my Tita Cita. 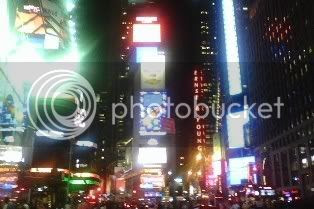 I worked at a publisihing company for four years at Times Square at 1515 Broadway (btwn 44th and 45th strets) up on the 35th floor. My office had the Hudson River and New Jersey view. The sunsets were incredible. I guess my boss assigned that office to me so I'd stay late more often :)

There is a great Italian restaurant at 44th Street near Broadway, Carmine's. Try it some time.