You won’t have what you thought you'd have by your late-20s. But you’ll be happy. You’ll have a 350-square foot apartment in Manhattan. A MetroCard. A job as an executive assistant surrounded by amazing women. You’ll have great friends, New York, phone calls from mom, Vodka sodas, Lox cream cheese and bagels.

You’ll realize something new about yourself often. You won't seek to constantly reinvent yourself, yet you might not ever really know everything about you because different parts of you will change – sometimes frequently. This should probably bother you, but it won’t.
You’ll wish you were wittier, and you’ll be a sucker for a sense of humor. You won’t fall in love easily, you won’t get attached easily, and you’ll have to be both of those things if you’re going to get jealous easily; you’ll be able to thank a military-brat upbringing for that. You will be nominated for the "Most Friendly" Senior Superlative at your second high school, and you’ll be a nice New Yorker 10 years later. But you’ll have a dark side, and you generally won’t trust those who don't. You’ll like to step back and absorb certain moments so that you can remember the details; you’ll do that most often when your friends are laughing.

You’ll crave cliché “Sex and the City” moments because it’s how you once pictured your life – minus, of course, the Manolo Blahniks, Upper East Side brownstones, and voluminous consumption of Magnolia Bakery cupcakes without gaining a pound. Your narrative thoughts and meaningful conversations won’t be set to background music, but you’ll have the fantasy in syndication and the real thing right outside your window. You won’t worry that your life is becoming a cliché because there'll be a reason that you are not the first to live life the way you’ll choose to live it. And you’ll want to be Melanie Griffith at the end of Working Girl when she calls her best friend and says, "Guess where I am right now."

Good and bad things will happen. So embrace varying levels of disappointment so that you’ll recognize rapturous joy. Floss your teeth regularly. Take chances. Don't settle for what’s easy; seek what’s worth it. Take random walks in this city. Look for sights you can't believe, listen for sounds that tug at your heart strings, savor the feelings that take your breath away. Eat more fruits and vegetables; drink more water. Allow yourself to be swept off your feet regularly. Save money and spend wisely. Live like Anthony Hopkins' in Meet Joe Black so that you can wake up one morning and say, "I don't want anything more." 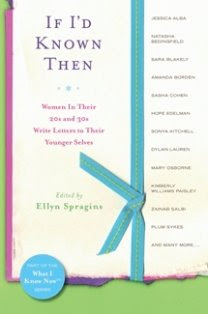 Working in digital advertising, I generally know that most publisher sweepstakes are motivated by sponsorship opportunities, advertising partnerships and increasing website pageviews. However, finding myself inspired by Marie Claire's "Letters to Your Younger Self" Sweepstakes, I recently combined thoughts I've expressed in my blog over the past year and a half in a letter to my younger self.

The first draft greatly exceeded the 500-word maximum, and I worked diligently to condense it per their rules. With a tendency to be verbose, writing within a maximum constraint has typically been harder for me than reaching a minimum, especially when I'm motivated by a topic. Perhaps I'll post the unrevised draft another time.

Unfortunately, due to my recent health condition, I forgot about the sweepstakes this week and only realized this morning that entries were due by 11:59pm yesterday. Bummer. On a personal level - since I did take this letter to my younger self quite seriously - it's more appropriate anyway that it appear here in my blog, where I can read it whenever I want to reminisce on my journey of becoming a New Yorker - and ultimately of becoming me.

From "Marie Claire invites you to Win a New York City Adventure":
This contest is inspired by Ellyn Spargins' WHAT I KNOW NOW series of books featuring famous women who share their personal letters. To get tips for how to write a letter your younger self, visit www.letterstomyyoungerself.com.

THE THREE MOST INSPIRING LETTER ENTRANTS WILL WIN [Assuming that my letter would have been good enough to win anyway]:
- A two-night trip to New York City [I already live here]
- An exciting photo shoot - a picture from each winner's photo session will be featured alongw ith their letter in an upcoming issue [It might have blown my blogger anonymity; not that enough people even read my blog to determine a connection]
- Lunch with Ellyn Spargins and a Marie Claire editor [That would have been pretty cool]
- Gift bag complete with a pair of YOU by CrocsTM shoes [28-year old women should not be wearing Crocs; strike 2 if you decorate yours with charms]
posted by KJS at 10:26 AM

That was a lovely letter :) Maybe I'll do one for my next post, in a bit of a blogging drought at the moment!!

WOW, beatifully written. Too bad you couldn't submit it. :(

I congratulate, what words..., a brilliant idea