After a Saturday night out on the town with my girl Iris, I dragged myself out of bed and to a birthday brunch in Brooklyn for my friend Gina C. I was joined by my best friend Tokii and her fellow Juilliard alum Jamario, four fabulous people from Gina's job, including a gorgeous girl who looks exactly like Maggie Gyllenhaal and has legs for days, Gina's roommates and other new friends.

We ate waffles cooked by the Birthday Girl and topped with everything, drank Mimosas, played Taboo! (which gets funnier the more Mimosas you drink) and had a hilarious photo shoot in the kitchen. What started as a brunch turned into an all day affair. By the time Tokii and I were headed back west to Jersey and Harlem respectively, it was getting dark and I was lamenting the end of another weekend.

The most refreshing thing about Brooklyn was the space. Gina and her two roommates share an enormous three-bedroom apartment. It took me an hour to get there from Harlem on the A train, and the commute from midtown would be more than what I would desire, but the thing about living in New York City is that you have to be willing to sacrifice one or more of three things:

When I looked out of Gina's window, the first thing I thought was: "It is such a beautiful day." And the second thing: "It took me an hour to get here from there?" 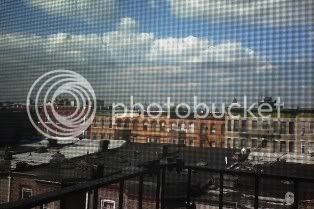 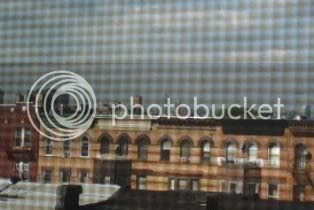 (The camera phone pic does it no justice, but the Empire State Building actually dominates the horizon from her window)
posted by KJS at 8:30 PM