I spent Thursday evening playing cards and drinking at The Half King with coworkers and Friday night with another colleague. We had a glass of wine at her apartment in Soho before hitting up Essex Ale House for dinner and The Vig Bar for a former coworker's birthday party.

While walking through Soho after work, a man in a suit passed me on the crosswalk. He was like any other man wearing a suit who has ever passed me at a crosswalk, except that his face was painted like a tiger. In 11 months, I have become so accustomed to seeing strange things in New York that I had barely thought twice about seeing a grown man wearing face paint. It wasn't until much later when I saw an entire street of adults dressed like Harry Potter characters that I thought about him again and realized he must have been a part of this.

Below is a camera phone photo op from my colleague's Soho apartment. The Twin Towers of the World Trade Center once stood in what is now a blank patch of sky from her living room window. 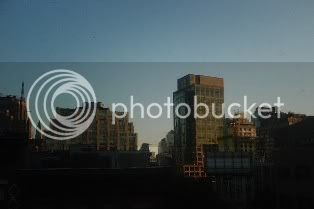