The highlight of my afternoon walk was an unexpected encounter.

In Harlem, often considered one of the (stereotypically) harder neighborhoods in the city, I came across an elderly Asian man (pictured below in the grey jacket and red cap), who appeared to have spilled a large bag of coins - some 400-500 pennies - in the middle of a crosswalk. He had a cane and was painfully trying to bend and pick up his pennies each time the light was red.

A young Black man had stopped to assist the older Asian man in scooping up his coins. I decided to help them, and when the light changed, we all scooted over to the sidewalk.

The light turned red again, and this time a young woman also stopped to help us gather pennies in the road. The light changed and we all returned to the sidewalk.

When the crossing light permitted pedestrians to walk again, a man in mid-stride looked down upon us as we squatted over the coins and said, "You guys are trying to pick up all of these pennies?"

Then he, too, crouched in the street to join us.

Altogether it must have taken 4-5 lights for all of us to pick up the elderly man's pennies. We'd scoop up handfuls and pour them into his outstretched hands and he'd stuff them into his jacket pockets. When those pockets were full, he began putting them into the pockets of his pants.

Just before I returned to the middle of the street to help gather the last of the spilt coins, I waited a few seconds so I could catch a quick camera phone photo op of this random act of kindness. 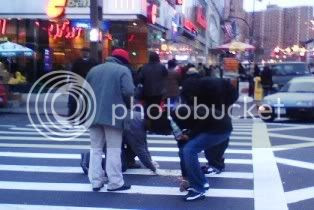 I bet if it was hundred dollar bills lying around everyone would be helping out.... themselves. :)

It's a record breaking summer here in Wellington (NZ) as well. The COLDEST SUMMER EVER ! Everybody's bitchin about it.

This is so New York. People, especially outsiders, like to focus on the negative but I can picture this happening in NYC more easily than in other smaller places in the US.

Thanks for the story, and thanks for making me smile. No disrespect to anyone, but New Yorkers are the nicest. The photos says it all. Nice blog, too!

This is great info to know.