My friends in North Carolina and other old connections from my days as a military brat have recently (and when I say recently, I mean within the past few years) begun posting pictures of their children on facebook and myspace. It often makes me wonder what I've missed over the past 10 years since high school (and the five since college). With Halle Berry and J.Lo having their first children in their 40s, I certainly do not feel old at 28 nor do I feel in any rush. But I still consider the conscious decisions I've made to redirect my course away from marriage and motherhood. For example, breaking up with Matt after high school instead of getting married like many of our classmates did. Pushing back Rickey's discussions of marriage proposals in 2002. Or moving to New York in 2006 instead of Atlanta, where Terrence lives in the off-season. Or choosing not to live abroad with him in the exciting foreign countries in which he has made homes.

I've had three serious relationships in 12 years and dozens of forgettable encounters in between, and I've always consciously fought to keep my own path. But am I subconsciously fighting something else? Am I afraid that I am too selfish to even fathom decisions between having my own space or incorporating His and Hers towels? Or researching family-size cars and learning how to make more than Ramen Noodles or my awesome signature salads? Or have I naively and stubbornly assumed that I've already had my one great love? Or have I just not found "the one"? Will "the one" understand my needs to be just a "me" and parallel my path until I'm ready to be an "us"?

Today the other executive assistants and I overheard our Executive Beauty Director scolding her children via the speaker phone in her office while reviewing RFPs. It was entertaining to witness a corporate woman, who is the epitome of grace under pressure while pitching advertising packages, unravel into a soccer mom right before our very eyes. Ah. The multiple hats we learn to wear.

Rather than pull out the mommy hat that I willingly allow to gather dust on the shelf next to my biological clock, I rounded out my week by dining at Buddakan and partying at Butter on Monday night, attending a New York Women in Film & Television screening of The Women at Clearview Chelsea Cinema on Wednesday (with my girlfriends, of course, where we sipped wine and ate tiny, crustless sandwiches). Then, I accepted a spontaneous invitation to join my secret service buddy and his friends for dinner at Brick NYC, a brand new Italian wine and antipasti bar that opened recently in Tribeca. Instead of calling a babysitter to tell her I'd be late - which is what mature, settled, family-oriented women my age do - I was sending "Gossip Girl" text messages to a few friends containing a phone picture I had just taken of Danny Masterson in his trademark bowler hat seated a few tables away.

For documentation purposes, of course: 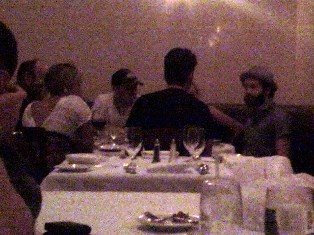 Will K ever pack up her single gal city life and trade it for diapers and family packages of Hamburger Helper? That's one secret that is too soon to tell. You know you love me. XOXO ... Gossip Girl ...

A Year Ago Today: No post
Two Years Ago Today: It Gets Late Awfully Early Around Here
posted by KJS at 7:42 PM

Well....speaking from experiece...I had wild times like your having...and wondered if I'm MISSING out on diapers...but it JUST WASN'T RIGHT. I didn't want to "Daddy Settle". BUT i DID have my kid at 40....and of course NOW I wish I would of started sooner...but I as a person wouldn't of been theee mom that I am NOW.... so everything will fall into place. Wear those stilletos as long as you can, and then you will not feel like you missing a night out at BUTTER!!! Your still very young!!! enjoy..

Never think for one second that you can't have it all. I have a beautiful family, great job, and wonderful friends. Do I get to do half the awsome things my girlfriends get to do? Hell No! But I like it that way. The pressure is off to look fab 24/7, my bank account is actually existent, and it keeps nights out at the box and 1oak from never getting old ;)

umm girl from Ohio chiming in lol!!
i dont want kids any time soon either..i mean well im only 16 but i dont even think i'll want them at 26 and if i doo have them im thinkking more like early to mid thirties...lol
and can i add that i love your amazing blog...it inspires me and reminds me why i am moving to NYC in 15 months!!! you are made for blogging girl..just think about it you have such an interesting life...international basketballing boyfriend...crazy VIP life in NYC!!! i hope we meet on the streets of NYC someday...even if i dont recognize you!!!