After shots, schmoozing and the televised Times Square countdown to midnight champagne toasts at Kevin’s gorgeous Bleecker Street apartment, my girls and I left the West Village around 2:30 a.m., argued with some drunk chics over a cab on Seventh Avenue, checked out an after-hours party at Kush on the Lower East Side, almost joined friends at Puck Fair at 4 a.m., but instead found ourselves speeding through the Lincoln Tunnel in a black Suburban around 5 o'clock and in a random New Jersey diner around 7:15. I finally made it back to Manhattan around 6:30 tonight.

Clicquot camera phone photo op. My nail polish matched my dress, which was pretty awesome since I found my New Year's Eve dress yesterday with only a few hours to spare after I had already gotten a manicure. 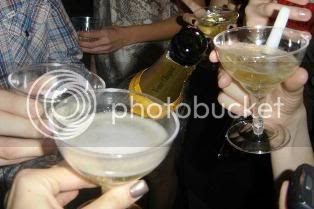