I met with Annisha, Gina B., Debasha and Tasha at Aspen last night to enjoy their $35 Prix Fixe Menu for NYC Restaurant Week Winter 2008. I chose the Warm Goat Cheese & Arugula Salad, Tasha and I shared the Pan Roasted Chicken and the Wild Salmon, and I ended up eating the remainder of everyone else's desserts ... so Snow Capped Cupcakes, Sorbet/Gelato and Pumpkin Flan. Add a few bottles of wine and lots of laughter. Equals another one of those New York nights that I always wanted.

At some point, as the last bottle of wine was drying up and some were on their third or fourth glasses of sangria, and I was picking the dessert crumbs off of everyone’s plates, I suddenly thought of Annalisa. I’m not sure why, but I remembered a promise I had made to her via a blog comment. I had promised that I would have a drink for her one night in New York City.

“So guys,” I said, as soon as there was a break in the laughter. “There is a woman in California, who reads my blog [this sounded super nerdy to say out loud, but none of my friends snickered or raised an eyebrow] and has always wanted to live in New York, but she began a life as a mother instead. I promised her awhile ago that I would have a drink for her in the city. So can we toast Crazy Mom of Three?”

"Sure!" everyone said. Odd requests are generally not questioned by my crew once the adult beverages begin to flow.

I raised my glass and my friends raised their glasses without hesitation.

“To who again?” Gina asked, her eyes glazed over by her sangria.

“To Crazy Mom of Three,” I replied, holding my glass aloft.

“To Crazy Mom of Three!” we all said in unison.

We live in a world where technology has the capability to connect across continents people who have never met. It’s kind of amazing. So are my friends. 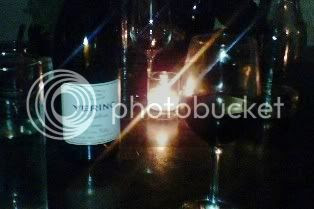