During a round of Taboo at a friend's birthday BBQ in Morningside Park this afternoon, Bettina was attempting to describe a word without saying any of the listed taboo words on the card:

"Headache!" all of the girls on her team shouted in unison. An awkward silence and confused wait-a-minute looks circulated among the guys of the opposing team. 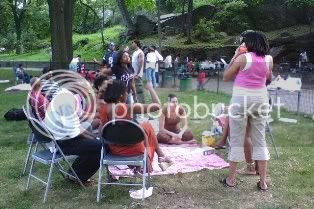 The answer was, indeed, headache.
posted by KJS at 7:06 PM