So even though I generally only take the amNY each morning on my way to the gym in order to help the adorable, little woman at the top of the Bryant Park Station subway stairs at 42nd and Fifth do her job, I actually skim through it 1-3 times a week. I was disappointed yesterday to read various letters to the editor regarding the termination of Five-on-Five. And there among the various responses to the “feature’s apparent demise” was even a note from the East Village Idiot, a New York blog that I read regularly and to whom I frequently link posts whenever he writes anything that really makes me LOL.

So no more Five-on-Five, huh? Well, OMG. INBD. Before I stop talking like a sixth grade school girl, I just wanted to say that there are few things better than witty, sarcastic sports banter on a Friday morning following a long workweek, and now there is only one reason left for me to continue picking up this paper. So if the adorable, little woman at the top of the 42nd and Fifth Bryant Park subway stairs ever stops greeting me each morning with an amNY, a cute smile and the words, “Have a good day, miss,” I will start taking the Metro instead! You hear that, amNY!

Featured in the camera phone photo op below is the adorable, little woman (in the hoodie and red vest) facing off against the orange and green Metro New York paper hander-outer. 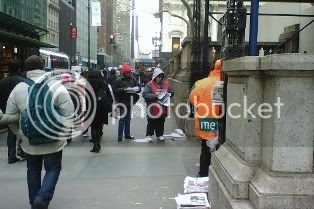 I love the amNY/Metro wars. They brighten my morning.

Yea, this morning I had both papers thrust in my face at the top of the stairs, but my adorable, little amNY woman won. I'm telling you, she is the sweetest little lady. If she is ever fired or quit, I might start paying for The Post.