I didn't mean to walk right up onto the World Trade Center Site today. Per a coworker's suggestion, I was on my way to Century 21 Department Store to buy winter jackets, and I turned a corner and there it was.

The last time I had been there, I was a college junior who had come to New York City with classmates from Western Carolina University to compete in the 2001 Model United Nations Conference. It was early on a Tuesday morning - exactly 22 weeks to the day that the Twin Towers would fall - when half a dozen excited undergraduates rode the express elevators to the Observation Deck at the top of Tower 2. But this afternoon, instead of stepping into the shadow of two enormous structures as I had done over five years ago, I rounded a corner and stared at blue sky and an empty reminder of a younger and innocent place and time. 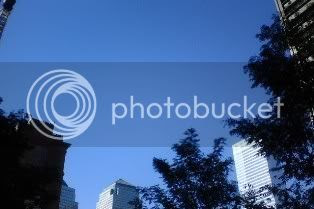 It was a gorgeous day. I wandered along the edges of the construction site and tried to figure out why my heart was pounding in my head. There is something you feel when you are there - maybe it was just because it was my first time since 2001. But it's undoubtedly hallowed ground. Even while surrounded by thousands of people and the hustle and bustle of the Financial District on a Sunday afternoon, there is something there that makes your hair stand on end. On fences and barricades were images of before, during and after September 11 and displays of the future with the slogan "It's Happening Now."

I looked up into the sky and wondered where I had been standing in Tower 2 on that April 2001 morning, when I had called my former boyfriend Rickey from a 107th floor payphone (that trip had taken place before my cell phone days, and he had been in his dorm room at WCU getting ready for class).

"We have to come here together one day. You have to see the view from up here," I had said to him. The towers would be gone 22 weeks later. And he would be gone two years after that. I wish I could ride the express elevator into the sky and run up to that girl on the payphone and tell her what she doesn't know is happening now. But would I even recognize her if I saw her?

Back to today. After unsuccessfully struggling through the mad house that is Century 21 on a weekend afternoon, I left the department store empty-handed and strolled about the Financial District.

St. Paul's Chapel both stands out and fits in on its corner in the center of downtown, kind of like the penguins in Central Park. The chapel, just a block away from the World Trade Center, was found widely and miraculously untouched after the Twin Towers fell, as seen in James Wheeldon's photo published in National Geographic below. 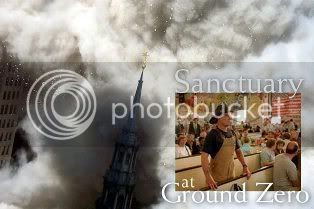 And this is another camera phone photo op from today. 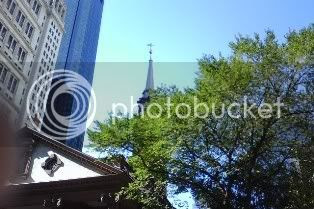 There used to be two towers behind that steeple. I'm glad I know from experience.
posted by KJS at 10:16 PM