A few weeks ago, my colleague Sam went to a client event on a roofdeck in Midtown and returned the next morning raving about the location at 620 Fifth Avenue. He emailed me this photo, which is not an actual image from the client event, but was the same venue set up for a ceremony and cocktail reception. 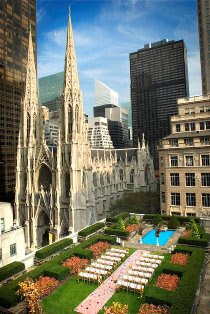 It reminded me that there is this entire world of Manhattan elite, living in an entirely different New York from the rest of us, existing above us in the summits of the city. Gossip Girl comes to mind, which coincidently is currently filming on Sam's block in Brooklyn, and is a segway to a memory of a recent scene I saw in a Crate & Barrel on the Upper East Side, when Terrence was helping me shop for synthetic hydrangeas (because I've killed everything I've tried to grow in my apartment and on the fire escape).
I witnessed an extremely heated discussion between a mother, clearly of foreign decent, and her late-teen/early-20s Americanized daughter, while the American father and his other child stood quietly to the side. Paraphrasizing their conversation, the daughter's side started out a little something like this: Mom! Are we, or are we not, here to shop for my apartment?! Did you not open the the links I sent you and look at the color pallete I want?!
Terrence's comment to me later: I wonder how far my sister would fly before hitting the ground if she talked to my mom like that.
Maybe if you've only known a world as ostentatious as the peaks of New York City, it's easy to lose sight of the realities that exist below, like the palm of your mother's hand.
A Year Ago Today: City Walk #11 - Nolita ("North of Little Italy")
Two Years Ago Today: No post
posted by KJS at 10:16 PM

Tonight I just walked by Rockefeller Center again. As I did, I thought of asking you what I am going ask you now. I am always curious of how to get up to the roof top garden at Rockefeller Center, which there are two of them. If you know how, would you please tell me?

I'm sure you know about "Top of the Rock" -http://www.topoftherocknyc.com/welcome/default.aspx - but I don't know if the roofdeck gardens pictured here - http://en.wikipedia.org/wiki/Rockefeller_Center - are open to the public. I'll ask around.