From (my other blog) Blog-By-Bike:

It seems ironic - if ironic is the right word - that tonight I'll be bringing in 2010 holding a tray of drinks, four years after I swore I would never do it again. It's as if all of my biggest goals are destined to involve multiple jobs and a drink tray [job #2].


Monday, January 1, 2007: Terrence and I arrived in Times Square at 3:30pm and were filtered into one of several dozen corrals. Strict rules were in place, such as no alcohol, lawn chairs or space heaters. Though the rules didn't seem to be strictly enforced - everyone seemed to abide accordingly. I'm sure it had something to do with the thousands of NYPD and FDNY officers, police dogs and occasional machine gun-ish weapons.

To our right was a metal barricade and one of three large stages; to all other sides of us were a group from Australia, four reunited high school friends who now live in Illinois and Kentucky, a couple from South Florida, and half a dozen foreigners who I am going to venture to say were from an Eastern European country.

I might have been the only current resident of New York City within a 3-mile radius of Times Square - as my coworkers had warned when they tried to talk me out of my New Year's Rockin' Eve plans.

"Do you really want to stand in the cold for 10 hours surrounded by millions of tourists?" one of my colleagues had asked. The truth is that New Year's Eve in Times Square is one of those things that I had to do at least once in my life. I'll probably never do it again, but it was something I had to do, and I had to do it this year. It's the way I wanted to bring in my first year in my new home - even if I wasn't actually going to be bringing it in with any of my new neighbors. Terrence was not exactly feeling my New Year's Eve celebration plans either, but he didn't make me ask him more than three or four times before he gave in.

We waited approximately 8 1/2 hours for roughly fifteen minutes of celebration. While not every minute of anticipation was jam-packed with excitement, the evening was filled with live performances, hourly fireworks and periodic showers of confetti. McDonalds waited until the corralled masses were on the brink of insane hunger and then appeared in the streets to take orders for delivery. After five hours, we gladly paid $16 for a Big Mac meal and a 2-Cheeseburger Meal with hot cappuccinos.

Though many would argue that the countdown to the New Year and subsequent few minutes of cheers, song and celebration are overrated simply due to the wait time involved, I have to admit that the simultaneous countdown to 2007 and the cheering, the singing/humming of "Auld Lang Syne," and the jumping with glee in Times Square were approximately five minutes of pure joy for me.

I brought in 2006 in a smoky casino in North Carolina holding a tray full of drinks and watching the guests around me jump up and down, blow horns, and kiss and hug each other. It's weird how you can feel completely alone in a sea of people. My only solace that night - one year ago - had been to picture myself in a year somewhere in New York City. So it had to be Times Square tonight. My New Year's Eve had to be better than last year. For me.

10 ... Monday-Friday with an administrative 8-5 in NC
9 ... weekends spent serving beverages in a casino
8 ... waitressing on weeknights in a crab shack
7 ... selling my car and furniture
6 ... packing my belongings into a stow-and-go minivan
5 ... driving all night up the east coast and arriving in hell
4 ... sleeping on an air mattress in the South Bronx for 3 months
3 ... temping at my first job in the city
2 ... tiny studio apartment for $1000 a month
1 ... being able to say everything - from the moment I decided I was really going to move to New York to waiting in Times Square for the ball to drop - was worth it

Tonight I was again in a sea of people, but for a few brief moments, I felt like I was one with everybody. It's so cliché but the sheer, non-alcohol influenced happiness was absolutely surreal. For the first few minutes of 2007 - despite what hardships may follow - we were at peace with ourselves, our lives and the world.

Immediately after "Auld Lang Syne," Frank Sinatra's voice floated over the square as confetti drifted in loops and swirls to the jubilant bodies below.

I sang along at the top of my lungs, completely off key, and half swaying off beat and half jumping up and down, waving my long, red balloon, and thanking my lucky stars for this night.
Back to the future ... my entry into 2010 won't be as fabulous as my first New Year's Eve in New York City, but I'm hoping to make 2010 a hell of a year. 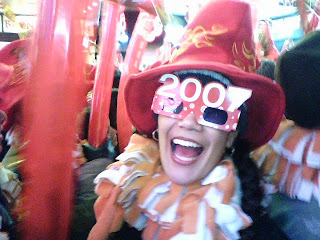