Letters to Our Younger Selves

From (my other blog) Blog-By-Bike:

Ellyn Spragins and I first connected when she commented on a blog post in which I had included a copy of a letter to my younger self that I had written in 2008. It was inspired by a contest in Marie Claire magazine that was based on Ellyn's books. I never actually entered the contest, but two years later, my letter led to a personal invitation from Ellyn to host one of the inaugural "Letters to My Younger Self" Parties. After I agreed, she sent the invitations, party kit, a free copy of her latest book to reference at the party, which had a personalized inscription from Ellyn to me, and swag for the gift bags (which included products from Neutrogena, Trish McEvoy and Suze Orman). Virtually all I had to do was be a host. And since I organized a potluck picnic, I spent less than $100 on pens, gift bags, champagne, orange juice and disposable cups, plates and eating utensils).

In a note to the party hosts on March 6, 2010, Ellyn mentioned that there would be nearly 50 LTMYS Parties taking place across the United States during the week of April 30-May 2 - an initiative that she is developing into a product associated with her books. Among us, she noted, were dear family members, treasured friends, neighbors, readers, attendees and organizers of her speeches and Letters to My Younger Self Seminars - women spanning age ranges from their twenties to their sixties.

And so it came to be that seven of my 20- and 30-something girlfriends gathered in Central Park on Sunday, May 2, for our own LTMYS Party - a picnic brunch with discreetly-contained mimosas (hey, Mayor Bloomberg said it was ok) and delicious snacks (most notably, lemon-artichoke pesto and sliced baguettes from Zabars). We shared our potluck snacks, drank premium orange juice spiked with cheap champagne (except me since my bicycle training rides are getting longer), enjoyed small talk and laughter, and then listened while three friends read aloud from Ellyn's book - letters by Diane Von Furstenberg, Bobbie Brown and Barbara Walters. Finally, under the cool shade of a large tree at the north end of Sheep Meadow, we began our own letters. Except me again. I just continued eating since I had already written a letter to my younger self and posted it on my blog ... hence the reason I am holding a laptop in our group photo. 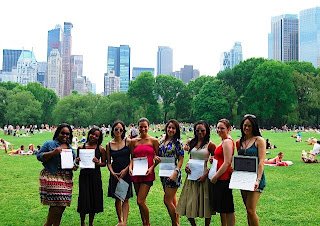 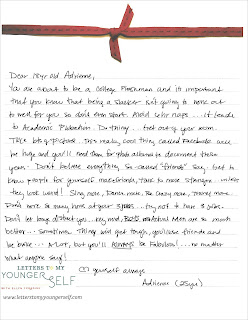 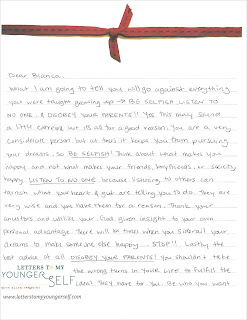 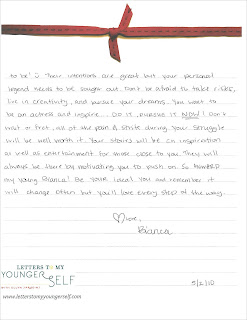 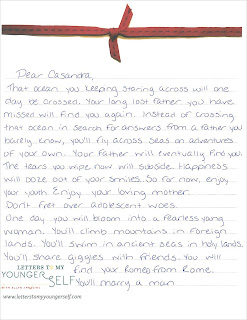 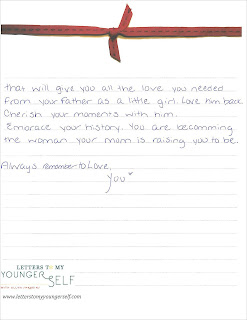 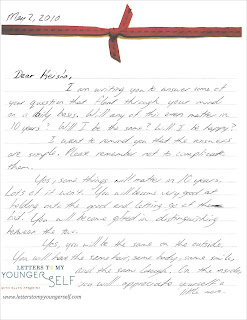 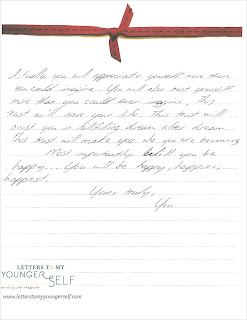 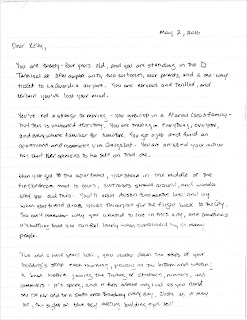 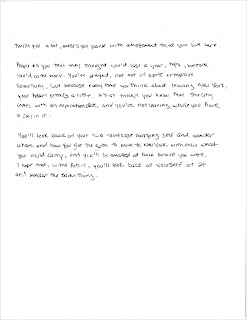 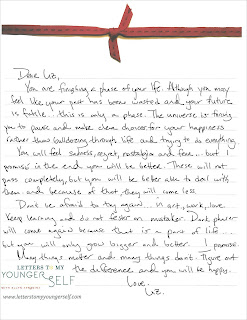 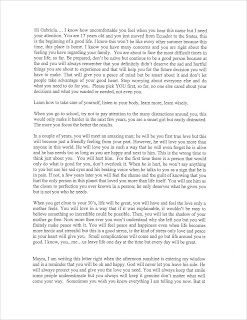 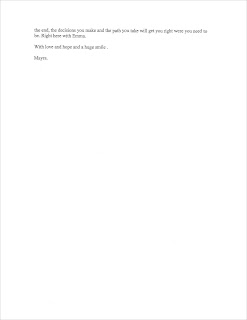 You won’t have what you thought you'd have by your late-20s. But you’ll be happy. You’ll have a 350-square foot apartment in Manhattan. A MetroCard. A job as an executive assistant surrounded by amazing women. You’ll have great friends, New York, phone calls from mom, dirty martinis, Lox cream cheese and bagels.

You’ll realize something new about yourself often. You won't seek to constantly reinvent yourself, yet you might not ever really know everything about you because different parts of you will change – sometimes frequently. This should probably bother you, but it won’t.

You’ll wish you were wittier, and you’ll be a sucker for a sense of humor. You won’t fall in love easily, you won’t get attached easily, and you’ll have to be both of those things if you’re going to get jealous easily; you’ll be able to thank a military-brat upbringing for that. You will be nominated for the "Most Friendly" Senior Superlative at your second high school, and you’ll be a "relatively nice" New Yorker 10 years later. But you’ll have a dark side, and you generally won’t trust those who don't. You’ll like to step back and absorb certain moments so that you can remember the details; you’ll do that most often when your friends are laughing.

” moments because it’s how you once pictured your life – minus, of course, the Manolo Blahniks, Upper East Side brownstones, and voluminous consumption of Magnolia Bakery cupcakes without gaining a pound. Your narrative thoughts and meaningful conversations won’t be set to background music, but you’ll have the fantasy in syndication and the real thing right outside your window. You won’t worry that your life is becoming a cliché because there will be a reason that you are not the first to live life the way you’ll choose to live it. And you’ll want to be Melanie Griffith at the end of Working Girl

when she calls her best friend and says, "Guess where I am right now."

Good and bad things will happen. And you'll have regrets. A few will stay with you always. So embrace varying levels of disappointment so that you’ll recognize rapturous joy. Floss your teeth regularly. Take chances. Don't settle for what’s easy; seek what’s worth it. Take random walks in this city. Look for sights you can't believe, listen for sounds that tug at your heart strings, savor the feelings that take your breath away. Eat more fruits and vegetables; drink more water. Allow yourself to be swept off your feet regularly. Save money and spend wisely. Live like Anthony Hopkins in Meet Joe Black

so that you can wake up one morning and say, "I don't want anything more." 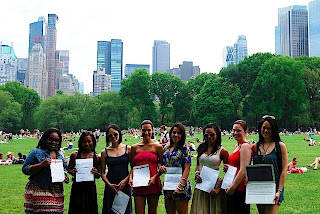