Returning to Western Carolina University was like going back in time. A group of us planned a trip for the 2008 Homecoming Weekend in a year that marks 10 years since we were freshmen.

I hear ghosts on that campus. Not necessarily of those who have died. But the sounds of our pasts. The ghosts of the younger versions of ourselves. We came face to face with memories from our college days and were intensely reminded of how much the university shaped the versions of ourselves that now exist.

I saw the younger me there. Sitting on "the bricks" between classes and sometimes skipping lectures on exceptionally beautiful days. Pretending not to see Rickey, the attractive new junior college transfer, walking down the street while I strategically sat where he would be sure to see me among those who congregated there daily. And then trying to appear nonchalant as I waited for him to walk up behind me and gently tug on my hair or tickle my side. Racing with him to step on the small plaque below the Alumni Tower. Seeing him saunter up the steps to the second floor of the University Center (UC) to visit me while I worked at the Student Information Desk. Photocopying our hands on one of the Xerox machines in Hunter Library. Opening a greeting card card while we ate Wendy's takeout on his bed in Leatherwood after he took me to see Hannibal for Valentine's Day. Refreshing the university's live web cam over and over again in my dorm room while he made different, silly poses in the shadow of the Alumni Tower.

I saw the younger me laughing at Tokii when she split her jeans while performing her trademark impersonations of Michael Jackson in Illusions; making silly videos while we were on RA duty in Scott Hall with "Ms. Sue Ella" and "Bernie Mac"; cheering for Monique during halftime of a basketball game; playing pool with Jessica in the old UC Game Room; going to Reid Gym after dinner to watch the football players play basketball; waving at Toya and Kori passing by in his SUV; cooking out during Valley Bally Hoo or Spring Fling; giving tours to new students at Orientation; watching SportsCenter with BJ, Jon, Pat and Dunstan; water gun fights in the summer; stomping through piles of leaves in the fall; sledding on Dodson Cafeteria lunch trays in the winter; accepting flowers that Rickey would pick off the UC Lawn in the spring.

The memories were all around us despite the vastly changing landscape of the campus. Helder Hall, where I lived my sophomore and junior years, is gone. A landmark of my past erased and replaced by a state-of-the-art cafeteria - complete with Starbucks. There is no where to relive my memories of Rickey sneaking a bowl of Tokii's cereal or diving into my closet in his boxer shorts. Or Tokii dancing in her bathrobe. Or Jonas and Jarvis benchpressing and curling Kamata in the hallway or asking a muffled, inaudible question and then yelling "Heeeyyy!" in your face. Or surprise birthday parties in the study. Or the night I stuck some forks in the third floor microwave. Or the snowball fight in the lobby. Or photo shoots in the hall. Or Kevin driving through the Helder parking lot in his tiny car, giving Terrence his debit card and telling him that under no circumstances was Terrence to allow him to spend the remainder of his refund check.

Those versions of all of us are there in Cullowhee, wholly defined by slices of time that exist one on top of another and are buried only by the passage of itself.

Our Stomping Ground in Photos
The Alumni Tower looms over the University Center Lawn. 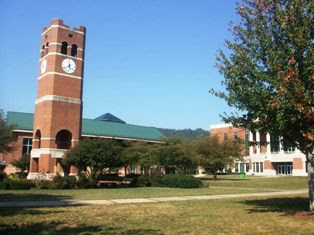 "The Bricks," which will be removed in the next phase
of campus renovations. 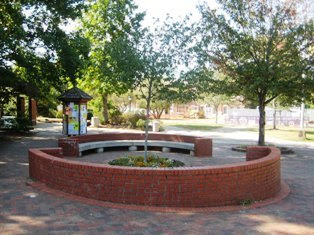 Where there were once two feet competing to stomp
on the plaque below the Alumni Tower... 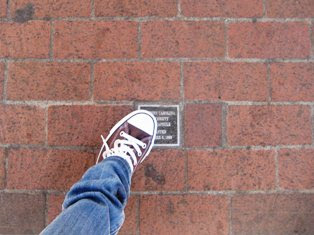 We were moved when we discovered a bulletin board that Jan now maintains, a woman who is - and always will be - remembered as so much more than a "lunch lady" - who captures all of us in our younger versions semester after semester. 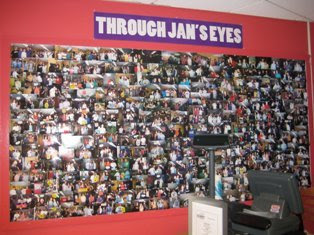 And a slice of time that we remember. Before the multimillion-
dollar renovations, a younger version of the WCU that we knew. 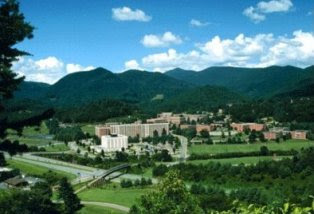 A Year Ago Today: No post
Two Years Ago Today: Subway Dancers
posted by KJS at 1:20 PM

It really did feel this way... you even reminded me of some of the fun we had :)

IT WAS YOUUUUUUUUU YOU WERE THE ONE THAT BROKE THE MICROWAVE ON OUR FLOOR!?!

beautiful school. Its amazing sometimes what we "forget" until were RIGHT THERE AGAIN!!!

you tell a great story..

I'm fine! Thanks for asking!
A lot of posts in draft are sitting in the queue for when I have time to edit/finish them. Stay tuned!

Thanks for posting pics of good ole WCU. I was a Freshman at the same time as you (graduated in '02) & I loved that place. I haven't been back since Aug. '07 & am still sad that they tore down Helder (lived there my Soph. year).