The Jonas Brothers are for children, what Jewish Holidays are for rush hour on the train. I don't think I saw one child under the age of 16 in the streets of Midtown on my walk to work. Now through my boss's closed window and seated outside of her glass walls in my 13-Going-on-30 cubicle, it sounds like Madison Square Garden is downstairs. The fire marshal should go inspect Bryant Park before the lawn collapses into the subway station.

The sidewalks surrounding the park became the 42nd Street and Fifth Avenue Campgrounds yesterday when teenage girls, armed with posters and homemade signs, and patient parents staked their claims on slabs of concrete in anticipation of the Friday GMA Summer Concert Series. Someone mentioned that they had started gathering on Wednesday. Looking down on the patchwork quilt of blankets and sleeping bags from my boss's window around 5pm, a coworker commented: "Miley Cyrus didn't even do that."

There is sort of a female cult following created by certain male phenomena. New Kids on the Block and Charles Manson come to mind.

I think we all know how this story is going to end.

Yesterday evening the children and parents marked
their territory. 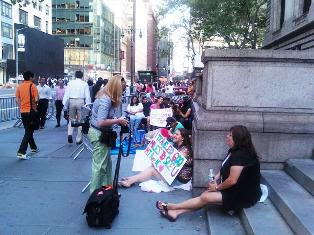 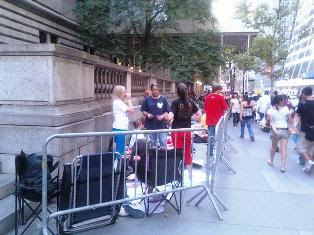 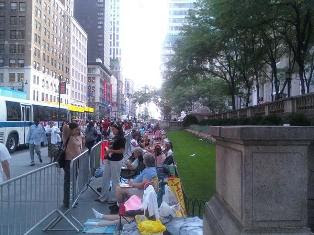 This morning the perimeter of the park looked like
the door at Tenjune on a Tuesday night. 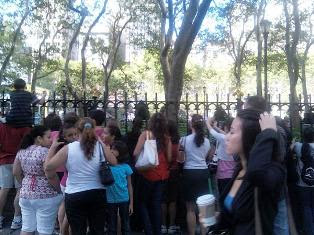 A Year Ago Today: No Post
Two Years Ago Today: Here I Go On My Own
posted by KJS at 8:53 AM